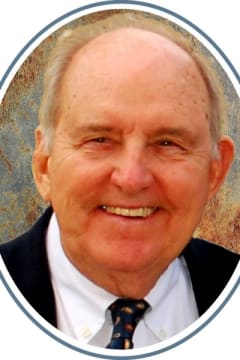 Drury Sullivan Caine III, 88, of Tuscaloosa, AL, was welcomed to the glories of Heaven early in the morning of October 29, 2020. He was born in Selma, AL to Frances and Drury Caine. He attended Albert G. Parrish High School in Selma and The University of the South, Sewanee. He received B.A. and M.S. degrees from Vanderbilt University, following which he served in the U.S. Army as a medic. He received his Ph.D. degree in organic chemistry from Emory University, where he met his future wife Virginia Hall Brinson. After their marriage, he performed post-doctoral research at Columbia University on a National Institutes of Health Fellowship, following which he accepted a professorship at The Georgia Institute of Technology, where he taught and performed research for 21 years. During that time, he taught for a quarter at University of California, Berkeley, as a visiting professor. He and his family moved to Tuscaloosa in 1983 after he was recruited by The University of Alabama as professor and Chairman of its Chemistry Department. After over 12 years as department chairman, he resigned that position and took a sabbatical year at The University of Alabama at Birmingham doing biochemical research. Afterwards, he resumed his responsibilities in teaching and research in Tuscaloosa, until his retirement in 1999 as Professor Emeritus.
Throughout his teaching career, he always maintained an active research program in organic synthesis, publishing as principal investigator approximately 95 papers in peer-reviewed chemical journals. During the course of his career, he directed the research of 20 doctoral candidates and several Master of Science candidates.
He received the University's Roger Sayers Distinguished Service Award in 1998.
During Drury's 37 years in Tuscaloosa, he was an active member of St. Mark United Methodist Church in Northport, attending regularly and serving on various committees. He was one of the first volunteers in the church's food pantry, serving that ministry faithfully as it evolved to aid approximately 50 families per week.
In 2015, he suffered a debilitating hemorrhagic stroke, which affected his right side. In retrospect, this began a different kind of ministry for Drury, that of inspiring others to persevere in overcoming their own obstacles. After completing medical rehab, he pushed himself to continue regaining his strength and mobility and living life to its fullest. Men at church enjoyed his increasingly strong handshake and the younger, fitness-oriented men at his gym often commented he was an inspiration to them.
His family knew he could always be counted on and that they were blessed to have him as a husband and father who loved them dearly. Following a second stroke early this year, many people have contacted him to say how much he has meant to them, both as a friend and a mentor. Always the gentleman, those who knew him loved and respected him.
2020 brought the second stroke, a fractured hip resulting in 6 weeks of virus-necessitated insolation in a rehab facility, and a recurrence of multiple myeloma. All of these took their toll. Throughout, he fought the good fight.
His family would like to thank all the wonderful healthcare givers who helped him and improved his quality of life.
He is survived by his wife of 59 years, Virginia Hall Brinson Caine, whom he "loved sincerely," his daughters Frances Camille Caine Duerr (Douglas) of Atlanta, GA and Lauren Hall Caine Cooper (Kier) of Tampa, FL, grandchildren Case Sullivan Cooper, Kennedy Lauren Cooper, Isabelle Brinson Duerr and Claire Hanson Duerr, and beloved niece, nephews and other family members.
VISITATION: Monday, November 2, 2020 from 4:00 PM until 6:00 PM at Northport Funeral and Cremation Service, 5404 Watermelon Road, Northport, AL 35473.
GRAVESIDE SERVICE: Tuesday, November 3, 2020 at 11:00 AM at New Live Oak Cemetery, 110 W. Dallas Avenue, Selma, AL 36701.
In lieu of flowers, the family requests contributions designated "food pantry" be made to St. Mark United Methodist Church, Northport, AL.

Due to the COVID-19 pandemic and the mandated regulations with the state of AL, all attendees of services and visitations are required to wear a mask and attempt to maintain 6ft social distancing.

Please share a condolence, photo or memory of Dr. Drury. We welcome all condolences that are positive and uplifting that will help family and friends heal.