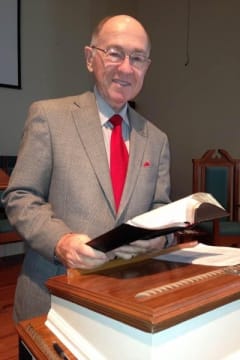 William H. (Billy) Austin died on September 12, 2020, age 77. A Montgomery, Alabama native, he was ordained to the ministry by the Capitol Heights Baptist Church at age 18, attended Lee High School, Samford University, and Southwestern Baptist Theological Seminary. Billy invested 59 years in service to the Lord, pastoring churches, operating retirement homes for the aged, twice served as President of SBAMA (Southern Baptist Association of Ministers to the Aging), 27 years as Registration Secretary of The Alabama Baptist State Convention, seven years as a board member of the Alabama Baptist State Board of Missions and one year on the executive committee of the Alabama Baptist State Board of Missions, and over two decades as President of the Alabama Baptist Retirement Centers. After retiring, he founded and established the West Alabama New Orleans Baptist Theological Seminary to train ministers, was approved by the North American Mission Board (NAMB) as a revitalization and church plant minister, established a Hispanic Mission and ESL (English as a Second Language) program for the mission and surrounding community. For the last three years of his life, he served as interim Director of Missions of the Tuscaloosa County Baptist Association. In a sense, he worked till he died, serving the Lord faithfully. He was preceded in death by his parents, Columbus Harris Austin and Frances Elizabeth Elliott Austin and his brother James Edward Austin. He is survived by his wife of 53 years, Linda Faye Headley Austin, his son, Mark Elliott Austin and wife Melanie Kay Davis Austin, granddaughter Madison Shelby Austin, his sister Jo Ann Austin Packard and husband Frank Lawrence Packard, and his brother Terry Lee Austin and wife Joanna Miranda Steward Austin along with many cousins, nieces and nephews.

“Well done, good and faithful servant. You have been faithful over a few things. I will place you over many things. Enter now into the joyous presence of the Lord.” (Matthew 25:23)

Due to COVID-19 pandemic and the mandated regulations with the state of AL, all attendees of services and visitations are required to wear a mask and attempt to maintain 6ft social distancing.

Please share a condolence, photo or memory of Mr. William . We welcome all condolences that are positive and uplifting that will help family and friends heal.